Dying for Sex won the Podcast of the Year award at the inaugural Ambies Awards, produced by The Podcast Academy. The Wondery-produced show posted its final episode 14 months ago, perhaps demonstrating how evergreen podcasts retain their currency. Dying for Sex is a show about a woman, Molly, who when diagnosed with breast cancer leaves her unhappy marriage and embarks on a series of sexual adventures to help her feel alive. The interview format is conducted by Molly’s best friend Nikki Boyer, who accepted the award.

The first annual ceremony was streamed live from Los Angeles, CA and hosted by standup comic, actor and writer Cameron Esposito. The evening featured awards in 23 categories and honored WTF with Marc Maron with the Governors Award which recognizes a podcast or individual for the compelling impact they’ve had on the industry; and Teenager Therapy received the Audio Impact Award which recognizes an individual or podcast that has made a significant, positive impact on its listeners.

We wondered to what extent indie podcasts and small networks might be represented in the winners list (see below). If The Podcast Academy represents podcast creators at all  levels, we might expect upstart networks or unaffiliated wins. We compared the 23 winning networks (some networks won multiple awards) to the most recent Podtrac and Triton Digital ranking of top podcast publishers. In the table below, we marked (X) next to publishers which appear in either list. There are 13 of them, and 10 publishers which don’t appear in the rankers. 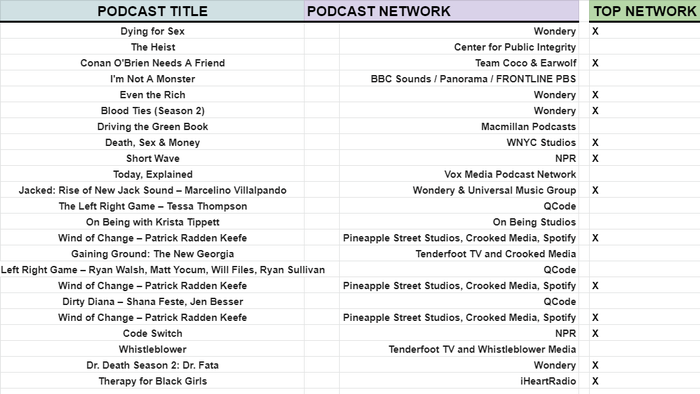 (In the graph above, we assign Wind of Change to Audacy, which owns Pineapple Street Studios — but that is an arguable decision considering the co-networks Crooked Media and Spotify, also listed. We also assign Conan O’Brien Needs a Friend to Stitcher, a top publisher and parent to Earwolf and Team Coco.)

Podcast of The Year

I’m Not A Monster

On Being with Krista Tippett