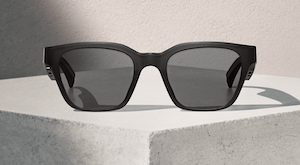 Despite a few early experiments, augmented reality glasses have mostly remained the stuff of science fiction. But Bose is making its own attempt to enter this space with the launch of Frames glasses in the U.S. The audio-focused sunglasses contain speakers in the frame and microphones near each temple. Frames come with support for Siri and Google Assistant, although the only supported interactions are for music playback.

“Unlike other augmented reality products and platforms, Bose AR doesn’t change what you see, but knows what you’re looking at – without an integrated lens or phone camera,” the company said in announcing its audio AR program at SXSW last year. “And rather than superimposing visual objects on the real world, Bose AR adds an audible layer of information and experiences, making every day better, easier, more meaningful, and more productive.”