The Australian Broadcasting Corporation released results from its fourth annual podcast survey. The project included more than 2,800 participants, with about 2,500 who identified as podcast listeners. Among the podcast listening cohort, weekly listening trends revealed high rates of engagement with the audio format. More than two-thirds (68%) of weekly listeners tuned in to more than four episodes in the past week. Nearly half (49%) listened to at least four different podcast series in the previous week.

People said they pursued podcasts for entertainment and education. When asked about why they tuned in to podcasts, 79% said “to entertain me.” ABC noted that listeners in the 14-34 age group were more likely to give that answer. Close behind, 75% said they listened “to learn new things” and 70% said “to inform me.” Other notable responses included 47% calling podcasts “an alternative to radio,” while 34% listen “to catch up on broadcast radio programs I missed.” The catch-up answer was more common among the 55 and up age bracket. 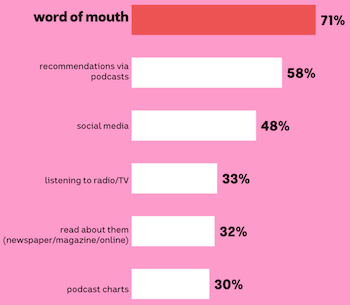 The survey also inquired about discovery and finding new podcasts. Twenty-six percent of respondents said they listened to a new show in the past week, while 66% had tried a new series in the past month. Word of mouth was the leading factor in discovering new shows, with a 71% response rate. Recommendations given in other podcasts was second with 58%, followed by social media at 48%. Ages 14-34 were more likely to lean on word of mouth, in-show recommendations, and social media compared with the older groups, which had higher rates of finding new podcasts on radio or television.

The connection between radio and podcasts for older listeners continued through other parts of the survey. Although catch-up radio was only 24% of the podcasts all respondents heard in the past month, it had a 57% share among ages 55+. Radio accounted for just 15% of the monthly listening for ages 14-34.

Finally, smartphones were the most commonly-used device for podcast listening for 85% of respondents. The mobile devices took a 91% share for ages 14-34, dropping to 61% for ages 55+.