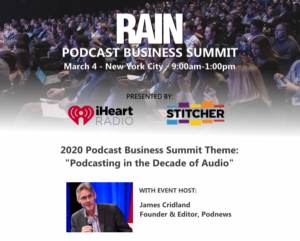 Stephanie Ruhle will sit for an onstage conversation with Conal Byrne, President of the iHeartPodcast Network. Ruhle’s work represents an interesting crossover from a well-recognized television anchoring career to podcasting.

Sarah van Mosel is one of the most accomplished and well-traveled executives in podcasting, who landed at her current role after stints at Market Enginuity, Acast, and WNYC.

They join a cast of 29 speakers who will star in a dynamic half-day knowledge and networking event in midtown Manhattan at New World Stages. During its tenure, the Podcast Business Summit has been established as the global leading B2B podcast conference, exclusively devoted to exploring, demystifying, and advocating for the unique opportunities of on-demand audio. This year’s event is presented by iHeartRadio and Stitcher, with support from founding sponsor NPR.

Here is the additional speaker roster for this year’s event, which will be hosted by Podnews founder and editor James Cridland: