DataReportal has released a sweeping analysis of digital statistics and platforms. The company’s third-quarter report covered a range of topics about online behavior and technology, including voice assistants.

Globally, 43% on Internet users reported using voice controls on any device. India was the leading market with 56% of responses, followed by China with 55% and Indonesia with 54%. The United States was in the middle of the pack with a rate of 36%. Use of voice search and voice commands was most common among the younger survey respondents, with the rate declining steadily for each age group up. The 16-24 cohort had the highest usage rate at 52%, followed by ages 25-34 at 49% and ages 35-44 with 43%. 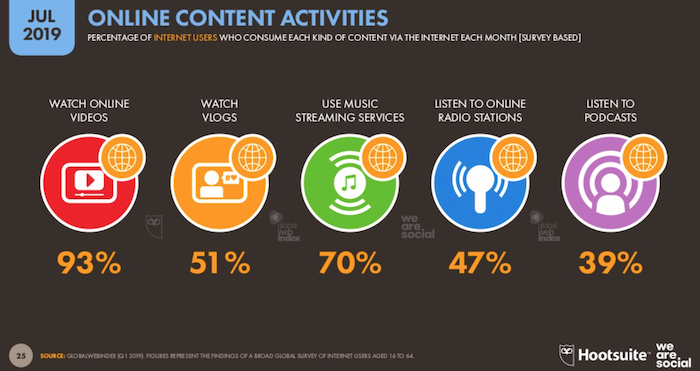 The most common online content consumed by Internet users in the survey was videos, which secured 93% of the responses. Streaming music services were the second most common response with 70%. Online radio took a 47% share and listening to podcasts was 39%.

The survey also asked participants about paying for online content. Streaming was the most likely to get respondents’ money, with movie and TV services leading at 26% and music services securing 23%.