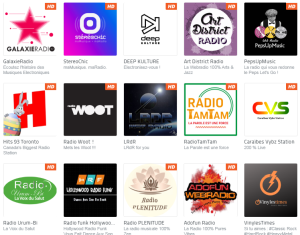 RadioKing, an internet radio station provider based in Tourcoing, a city in northern France, reached out to us with news of a product update. There are two parts for existing and prospective stations.

First, the Media Library, which is the core product used by station owners. New intelligence features have been baked in which enables easier editing of mix points, analyzing BPMs (tempo), and creating playlists quickly. The upgrade is promised by RadioKing to presage more innovations around planning and statistics.

On the back end, the company has overhauled its server infrastructure, promising to deliver “higher power and performance.”

The sign-up plans at Radio;Kind are in three tiers which deliver higher audio fidelity (up to 320k MP3) and more listening hours per month with higher cost — standard pricing logic in the internet radio industry.

We took the press release as an opportunity to browse RadioKing’s station portfolio, and found quick stream launches and stable listening. the 320k stations are marked as “HD.” We did not hear any ads during a 30-minute station-hopping listening session. Station owners can add commercials to the station websites that RadioKing can build, but we didn’t find any mention of audio monetization, or royalty payments.