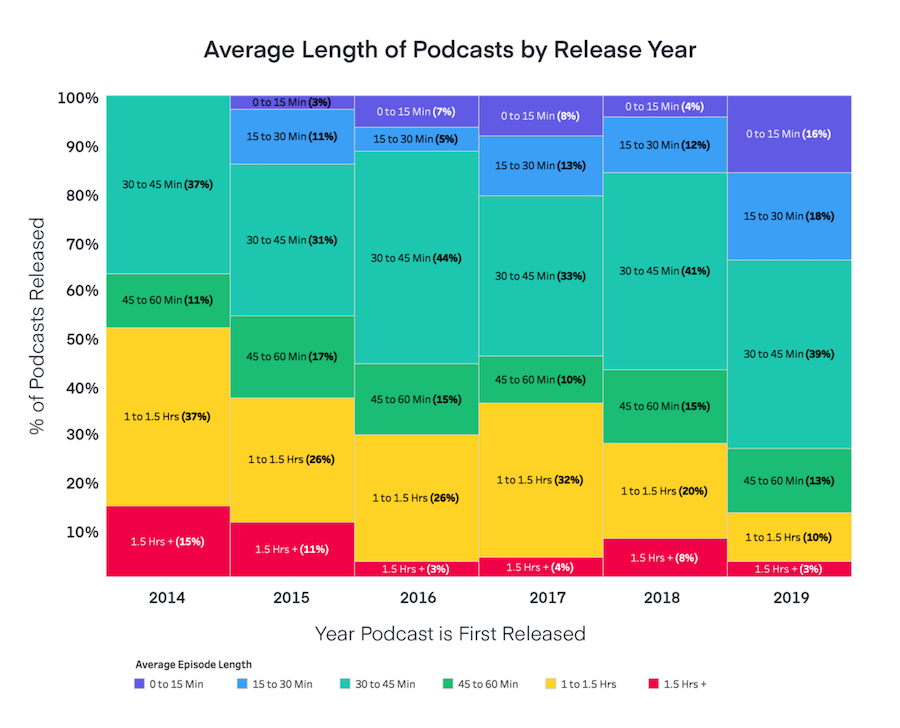 The latest blog post from Megaphone is a series of visualizations about how average podcast length has changed over time. The company reviewed data from the 549 podcasts on the Apple Podcasts Top 200 list between March 6th-May 11th. The results showed a large number of podcast episodes running just shy of an hour, which Megaphone deemed a nod to classic radio formatting.

However, when tracking show length by the year of a podcast’s premiere, Megaphone noted a jump in the share of programs running less than half an hour. Of the podcasts released in 2019, 16% were an average length of less than 15 minutes and 18% were between 15 and 30 minutes. Looking back to 2016 releases, only 7% of shows were less than 15 minutes on average and 5% averaged between 15 and 30 minutes. In contrast, for shows released in 2014, 15% ran more than 1.5 hours. Only 3% of shows released in 2019 have an average of more than 1.5 hours runtime.

Megaphone hypothesized that the trend toward shorter shows could mean that the audience for very lengthy programs is limited or that the high costs of talent and production have guided creators towards shorter episodes. The company also noted that breaking up 2 hours of content into multiple episodes usually means more downloads and in turn more ad revenue for the podcaster.