Yesterday we reported on the creation of the Media Roundtable, a new podcast industry watchdog group started by Oxford Road CEO Dan Granger. Part of its mission is to collaborate with Ad Fontes Media on a podcast bias chart that graphically positions shows in a matrix of left/right bias, and factual/fabricated content. (The chart does not have a political position itself; both left- and right-leaning shows can be classified as truthful or not.ad fontes bias chart 03192021

Today we received a first version of the chart, and here it is: 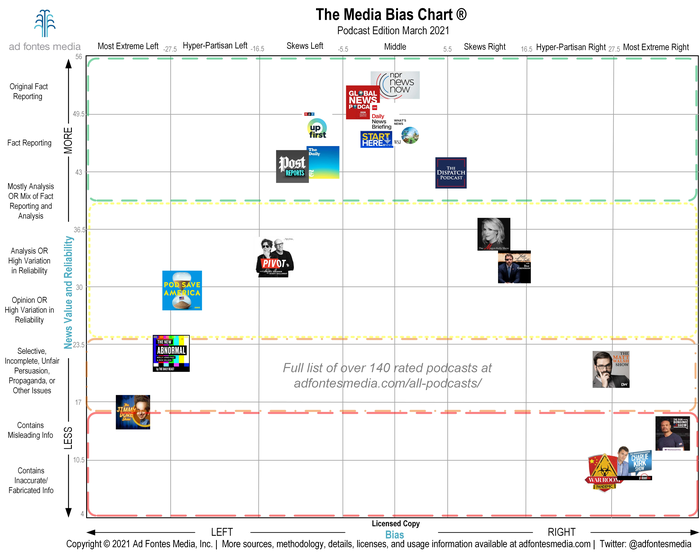 If there were a winner here, or a show with perfect equilibrium, it might be NPR whose NPR News Now sits smack in the middle of the left/right balance, and at the top of the News/Reliability scale.

Seventeen podcasts are represented here, out of many dozens which are being evaluated by Ad Fontes Media. We asked why the scarcity. “”Ad Fontes Media has released this limited subset of their rated podcasts in this free, publicly available chart format because their full set of ratings is only available through their commercial Ad Apex for Podcasts offering,” the company told us through its PR firm. More podcasts are being added to the bias-rated database at a pace of dozens per month, we are told. The free basic chart will be pudated sometimes, but the full can of beans is for subscribers.

How are podcasts evaluated on the bias scale? “Each of these podcasts [is] rated by having panels of three politically-balanced analysts (one right, one left, one center) listen to multiple episodes of each podcast. The analysts are trained in Ad Fontes Media’s methodology and listen to them in live sessions and rate them together.”