Edison Research had a busy time in Dallas last month, with one presentation at the RAIN Summit and two during the Radio Show. All of the talks shared the company’s latest statistics in both digital and broadcast audio.

During the RAIN Summit, the business shared a presentation titled The Top 10 Findings from Edison Research in 2019 (So Far). The talk by Director of Research Laura Ivey covered data from the Infinite Dial and Share of Ear surveys as well as from other investigations. Several slides illustrated the power and reach of podcasts. The talk also highlighted the ongoing trend of younger listeners driving the shifts to mobile and new technologies, plus smart speaker ownership emerging as a potent source of audio engagement.

The Radio Show presentations centered more on broadcast topics. The Secret to Longer TSL offered insights on radio habits. Even as this metric has been in a general decline, the research noted how its happening more rapidly among the 13-34 age group.

The presentation gave a special focus on when and why listeners change stations. In addition to quantitative research (e.g. videos of listeners explaining the “why” and “how” of their radio habits), Edison took a deep, detailed dive into the relationship listeners have with radio commercial breaks. It’s not breaking news that they don’t love the breaks, but that didn’t stop Edison VP Megan Lazovick from mercilessly characterizing radio’s ad-block model like this: “This is PPM-maximizing strategy: Have long blocks of content to rack up the quarter hours, and then sacrifice an entire quarter-hour completely. It’s like gerrymandering – you isolate the people who vote for the other party into a single district.” 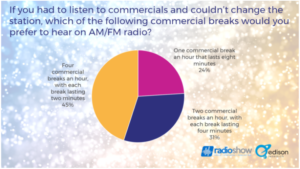 Lazovick wasn’t being entirely critical, and she emphasized that the strategy “is almost assuredly SMART.” But in the field, Edison sat listeners down and watched them listen to entire blocks (which they rarely do in real life, punching out when ad blocks begin). “Respondents shifted in their seats. They fidgeted. They would have switched away from the station, given the opportunity. […] Participants simply could not believe a commercial break could last so long.”

The point of it all, through the TSL lens (the purpose of the talk), was that the long ad breaks reduce time spent listening, which could be regarded as a growing crisis for radio. Edison canvassed survy respondents about alternate advertising models. Go HERE to see more.

The second Radio Show presentation — What Does it Mean for Radio to be Local? — dove into the value of local listening to both stations and audiences. This research centered more on the intersection between radio habits and other non-audio activities. The results explore what listeners want out of their local radio, and how local targeting could increase key stats for radio advertisements.