Music Biz and AudienceNet have released their Audio Monitor report on U.S. music consumption habits. The survey examined trends for on-demand streaming, which are being heavily driven by the youngest listeners, as well as AM/FM radio and smart speakers.

Listening to music was tied for the top media outlet among the overall responses at 20%, but younger ages over-indexed on the subject. For ages 16-19, music secured 25%, while it reached 21% for ages 20-24. Rates were also high among ages 45-54, which was also 25%, and ages 55-64 at 22%. When analyzed for time spent, there was a clear trend of preference among younger listeners. The average daily time spent listening to music was 151 minutes. Within the 16-24 group, the rate was 175 minutes, followed by 156 minutes for ages 25-34 and 159 minutes for ages 35-44. All of the older age brackets reported less than the average minutes. 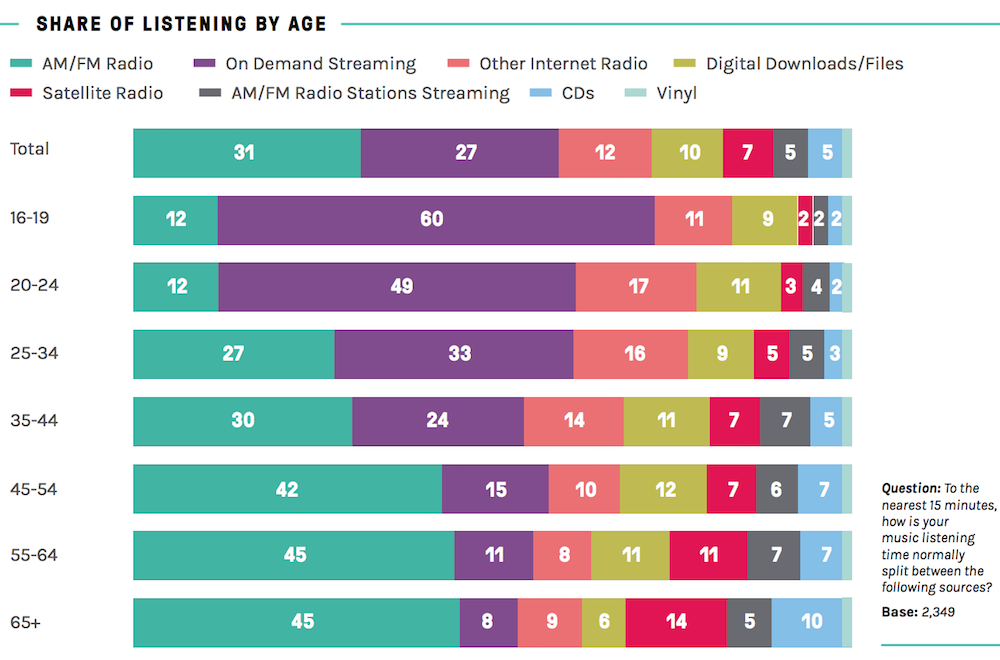 Terrestrial radio and on-demand streaming also showed the most range in popularity across age groups. Although radio was the top performer overall, it was responsible for only 12% shares in the listening for both the 16-19 and 20-24 age groups. Those brackets were much more likely to spend time streaming, with 60% and 49%, respectively. The habits were flipped for the oldest groups, with a much higher rate of time spent with AM/FM radio and as low as 8% streaming on demand.

YouTube was the top performer for all age groups’ on-demand streaming platform, and took an overall share of 38%. Spotify took a comfortable second place with 28%, and Apple Music trailed with 9%. Amazon Prime Music had an overall share of 7%, but also posted a noteworthy spike to 24% for the over-65 set. YouTube also topped weekly reach at 36% overall. Pandora performed well here with 21%, then Spotify with 17%. CDs had just 13% weekly reach and iHeartRadio had 11%. 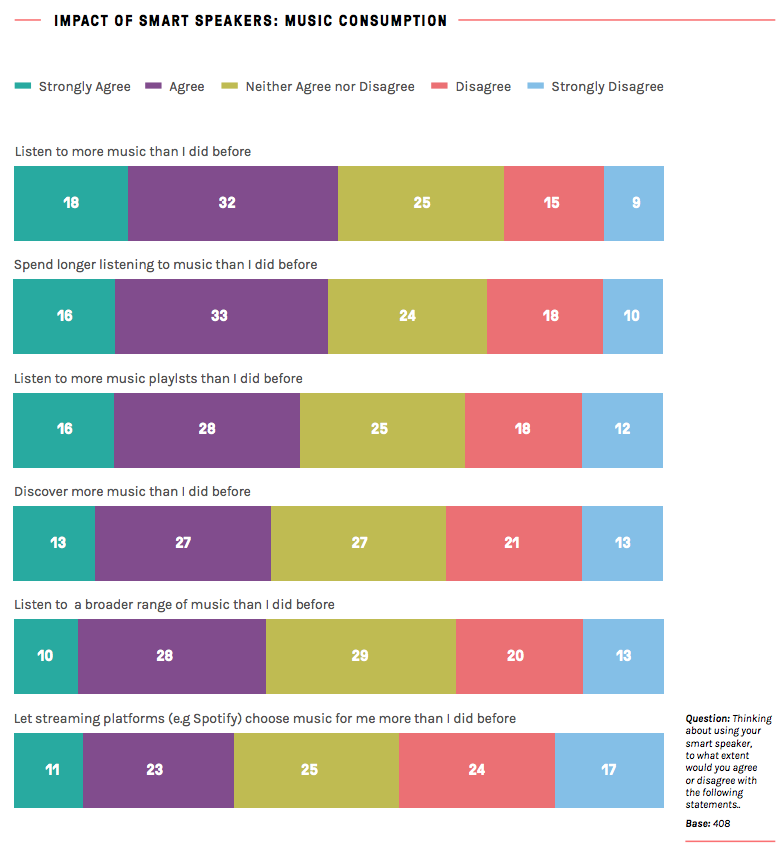 Finally, the report inquired about smart speaker ownership. Amazon boasted a large lead, with 42% ownership of the Echo Dot and 40% ownership of the Echo. It’s other Echo models took single-digit shares. Google was the clear second place with 12% apiece for its Google Home and Google Home Mini. Listening to music was the top activity for the owners of these devices. Smart speakers have been impacting habits in how owners listen to music (73%), listen to radio (65%), and listen to podcasts (62%). Half of smart speaker owners said they listen to more music since acquiring the device, and 49% said they spend more time doing so following the purchase.

The July 2018 survey included a sample of 3,000 participants aged 16 and up selected to be representative of the United States population.