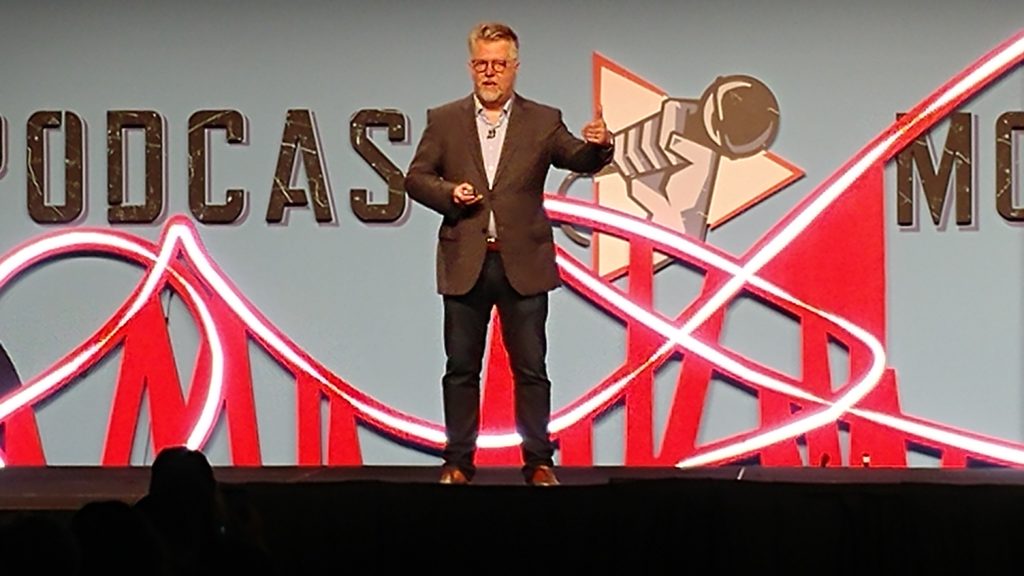 Swarms of podcasters populated the Rosen Shingle Creek resort hotel in Orlando, FL this week for two full days of learnings, plus some spillover before and after. As RAIN has attended year after year, we observe the mood becoming more serious and determined as the podcast industry’s challenges become as widely apparent as its opportunities.

There was plenty of inspiration in the key addresses. Conal Byrne, head of the iHeartPodcast Network, teed off on moderator Fred Jacobs’ questions with entertaining and motivating soliloquys about the uniqueness of podcasting (“Audio is the most intimate medium”) and recollections of early fan mail as he was building the Stuff Media brand — he was amazed to get mail from overseas war zones where soldiers listened to his shows.

Byrne also evangelized the connection of podcasting to radio, days after parent company iHeartMedia announced a new offering of Sunday night podcasts across hundreds of its radio stations.

So … the growth of podcasting is amazing, but is it a bubble? Will it burst, leaving thousands of would-be media stars forlorn, their microphone cables drooping? The New York Times implied as much in a recent article, the headline of which was put on the screen during a panel called Is Advertising Necessary? “Bullshit!” retorted panelist Sarah van Mosel, Chief Revenue Officer of Stitcher. She explained that high-spending advertisers return to podcasts again and again — podcast advertising works. And podcasting currently owns a tiny sliver of media buying.

It was about then that the session was interrupted by a fire alarm, and the entire hotel was emptied out, people spilling into the steaming mid-Florida swelter, eyelids fluttering in the grueling sun. This scalding jaunt was brief, and we were later told that one speaker began her presentation again from the start … presumably at 1.5x speed.

Rookies, Veterans, and those Feral Hogs

Seemed like everyone piled into the venue’s largest space for a return keynote by Edison Research SVP Tom Webster. You can count on new info in this presentation, and Webster interestingly separated “veteran” (three-plus years) and “rookie” (six months or less) podcast consumers, specifying how their listening tendencies differ.

What about the hogs? That was how Tom Webster playfully characterized the podcast audience — not insultingly, and even admiringly, as he noted that audio listeners root around for the content they love in all kinds of unexpected places, stretching the definition of “podcast.” As a preeminent example, Webster noted that Joe Rogan, arguably the world’s most successful podcaster, had eight-million YouTube views in addition to his regular podcast metrics. How should we account those numbers?

What Is a Podcast?

Eric Nuzum, ex-Audible and currently co-founder of Magnificent Noise, held forth in the Jacobs Media “Broadcasters Meet Podcasters” track. Nuzum carried forward the question of how podcasting is defined. (It should perhaps be noted that Nuzum historically has been resistant to the word “podcast,” as he explained in RAIN Summit Nashville a few years ago.)

Nuzum’s speech put forward the most compelling blend of encouraging admonishment and hard reality checking. “Discovery isn’t the biggest problem. It’s not that people can’t find us, it’s that they don’t give a shit. The podcasts they find don’t speak to them.”

That was stern, but Nuzum’s larger point was that the entire industry seems stalled when it comes to hit-making. “When was the last time you heard something which changed everything?” he pondered, calling a “WOW lag.”

“Are you making waves, or riding the wave?” he challenged.